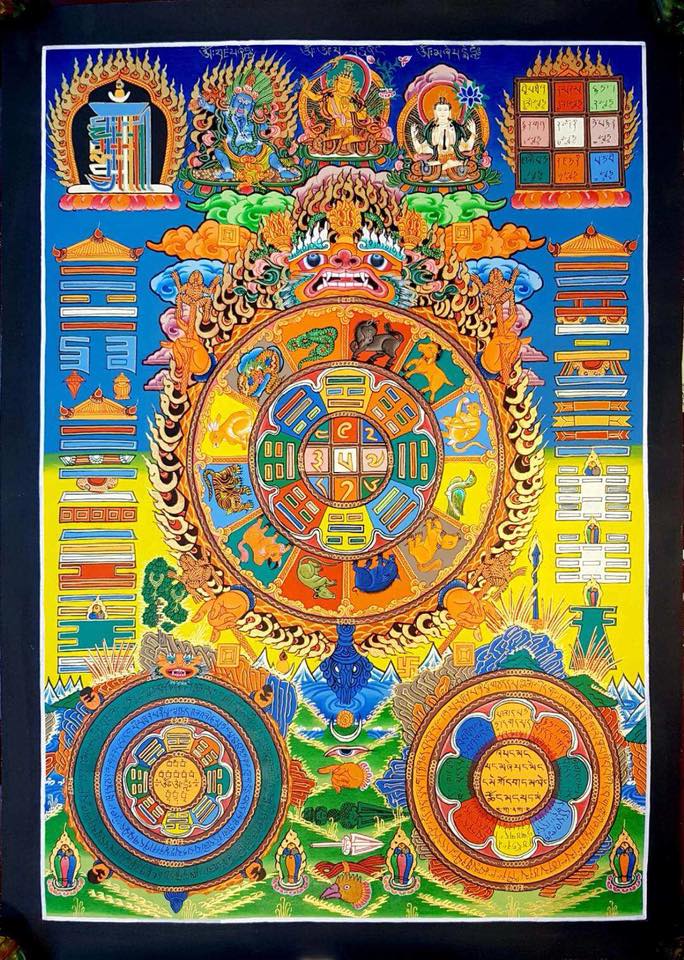 About Painter and Painting

Tibetan calendar is the lunar-based calendar. The Tibetan year is composed of either 12 or 13 lunar months, each beginning and ending with a new moon. A thirteenth month is added every two or three years so that an average Tibetan year is equal to the solar year.

When is the new year In Tibet Calander?

In the Tibetan calendar, The Tibetan New Year celebration is Losar. According to almanacs, the year starts with the third Hor month. There were many different traditions in Tibet to fix the beginning of the year.

Losar is the festival in Tibetan Buddhism. It is celebrated all over Nepal, Tibet, and Bhutan.

There is a public holiday at Loshar Festival.  The holiday is a new year’s festival, celebrated on the first day of the lunisolar Tibetan calendar, which corresponds to a date in February or March in the Gregorian calendar.

In 2018, the new year commenced on the 16th of February and celebrations will run until the 18th of the same month. It also commenced the Year of the Male Earth-Dog.

The variation of the festival in Nepal is called Loshar and is observed about eight weeks earlier than the Tibetan Losar.

It is very important in Tibetan culture and is used to set dates for various Buddhist ceremonies.  It follows natural cycles of time, the seasons, and the planets, and is associated with enhancing physical and emotional balance.

In the center of the thangka, we can see the image of tortoise lying on its back with the head atop and four limbs extended, each a precious jewel.

Central to the composition, the tortoise is illustrated with nine colored squares containing the Nine Magic numbers.

The second ring displays the Eight Trigrams of Chinese origin. Around this, circles the 12 animal figures of the 60 Year Cycle; surrounded by the outer edge of the tortoiseshell, which is engulfed by the flames of wisdom.

As an Astrological Chart, the heavens are revealed in a symbolic fashion, and as a Talisman, protects from misfortune.

You need to Login first